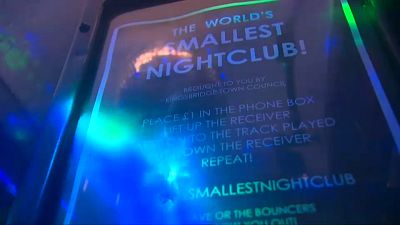 Lovers of bright lights and funky beats should hustle on down to Kingsbridge in Devon where the local pub is claiming to have set up the world's smallest nightclub...in a defunct phone box.

You may only be able to get your groove on alone, but the bouncer is friendly, and the songs cost a pound a pop from a diverse selection.

The 2.5m tall box became the 5,000th to be adopted from phone company British Telecom when Kingsbridge Town Council took ownership of it.

Local councillor Chris Povey explained how the decision to repurpose the phone box came about.

"Basically, we were sat in full council, we made a decision to adopt the kiosk and then it was getting around to what we were going to do with it. Various decisions and ideas were being thrown around the room, such as planting it up with flowers or leaflets and, to be honest, I was falling asleep with the excitement of it all, so I thought let's do something different, do something a little bit off the wall, so we put forward the idea of a nightclub and here we are today, with a glitterball, music, flashing lights," he said. All the proceeds will go to a local charity, @115.

Phone boxes in the United Kingdom, which were once iconic, have now mostly become defunct since the advent of mobile phones, and targets for vandalism. But Councillor Barry Fisher is optimistic.

"One would hope there's no vandalism, one would hope not. I mean we haven't yet decided on what security but if you just turn your head round to the right, you will see a big sign above you with 'police' written on it. As this phonebooth is literally right outside the local police station, I strongly suspect that you would have to be a very, very determined vandal to have a go at this phone box."