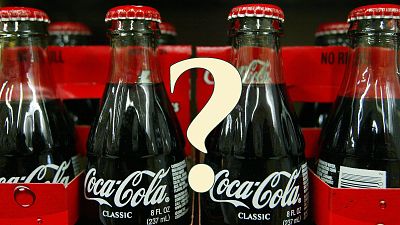 People all over the world may drink it every day, but Coca-Cola feels as American as apple pie

However, a new origin story of the famous soda has been making the rounds, causing many to think the original recipe might have originated in Europe.

A tiny distillery, Destilerías Ayelo, in Aielo de Malferit, a small village in eastern Spain, is claiming that the original recipe lays inside a safe there, reports El Pais, Spain's largest newspaper.

El Pais first reported the distillery's story on May 24 but the Atlanta-based Coca-Cola officially refuted those claims on Monday.

"This story from Spain comes up every few years. There is well-documented evidence that John Pemberton invented the secret formula for Coca-Cola in 1886," a company spokesperson told the Atlanta Business Chronicle.

So where did the popular soda originate? Atlanta pharmacist John S. Pemberton is credited with inventing the original syrup (in 1886), which he brought to his neighborhood pharmacy to mix with carbonated water, according to Coca-Cola's official history site.

Despite Pemberton's death in 1888, the bearded inventor has his "own" Twitter account, where he sometimes reminds us of the #TrueStory behind Coke:

Regarding the latest claims, Pemberton's Twitter has been silent on the issue, and in fact, hasn't been active since 2015.

However, as recently as 2011, rumors resurfaced about Coke's invention at the Spanish distillery, according to Public Radio International.

The distillery says its invention, Kola-coca, was the precursor to Coca-Cola's syrup, and that one of its first founders traveled to Philadelphia in 1885, a year before Pemberton's drink hit the market, El Pais reports.

Recognition, is the only thing the distillers are asking for, El Pais added, not money. Some also believe Coca-Cola boughtthe brand off the distillery years ago, according to the New York Post.

At least one Twitter user seemed to cast doubt on the claim dispute, questioning the spelling of the drink and long passage of time.

Extracts from coca leaves and kola nuts are reportedly two of the main flavorings in cola drinks traditionally, which may explain the similarity in names.

Pemberton's partner and bookkeeper, Frank M. Robinson, is credited with coming up with the name "Cola-Cola," as well as the distinctive script-style font.

Like many iconic foods and drinks, Coca-Cola's origins are so steeped in legend, that they only seem to grow wilder with the passage of time. We may never know all the details — and we will almost certainly never know the secret recipe.