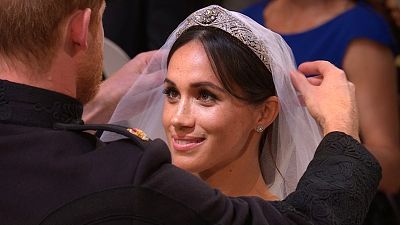 Meghan Markle stepped out Saturday ready to marry Prince Harry, finally revealing what everyone's wanted to see since their engagement was announced: the dress!

The dress and veil were both designed by Clare Waight Keller, the artistic director of Givenchy. The gown has a bateau neckline, sculpted bodice and features three-quarter sleeves. The queen loaned Markle the Queen Mary Diamond Bandeau tiara for the special day.

Kensington Palace said in a tweet that the veil was designed to represent the "flora of each Commonwealth country united in one spectacular floral composition."

Coming from the Cliveden House Hotel, where she and her mom,Doria Ragland, spent Friday night, the bride arrived at St. George's Chapel in Windsor, England, in a vintage Rolls-Royce Phantom IV wearing the beautiful gown.

Psst: There's rumored to be a second dress for the couple's reception Saturday night!

Prince Harry wore the frockcoat uniform of the Blues and Royals, a cavalry regiment of the British Army. The queen gave her grandsom permission to get married in the uniform.