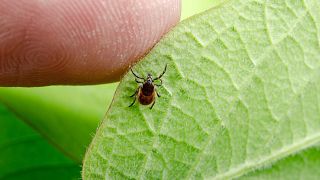 With the summer months just ahead, it's time to start taking early precautions to ward off harmful ticks carrying Lyme disease.

Lyme disease is caused by a bacterium carried and transmitted by deer ticks, which are so tiny that people often don't even see them, so they don't know they've been bitten. The bacterium, Borrelia burgdorferi, is closely related to the one that causes syphilis — both are spirochetes, so named because of their corkscrew appearance.

Although some 70 percent of people infected with the Lyme bacterium develop a red rash after their tick bite, a sizable minority do not, said Dr. Anne Norris, an assistant professor of clinical medicine at the University of Pennsylvania School of Medicine.

Those folks will often have a prolonged fever that doesn't seem to be connected with a head cold or stomach bug, Norris noted. They may also suffer from aching muscles.

If you're planning on spending any time outside this summer, it's important to keep in mind the major signs and symptoms of Lyme disease.