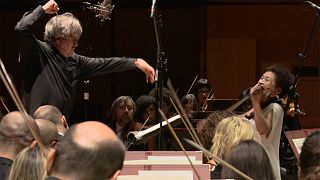 She's one of the finest violinists of her generation, South Korea's Kyung Wha Chung performs Brahms' powerful and challenging violin concerto with the one of the world's most-sought after conductors, Sir Antonio Pappano.

Kyung Wha Chung is a prolific recording artist, her dazzling and probing artistry has made her a much-acclaimed performer throughout her 40-year career. She is known for her passion, her musicality, and the intense excitement that she brings to her performances. The concerto in Rome was part of a series of concerts to celebrate her 70th birthday this year.

She says the stage is where she feels at home: "That's my space, I feel I belong there and I can say anything that's in my soul because music is without words - passion, anger, sadness, you can do it on the violin and it goes direct to people's hearts and souls. It makes you cry in sorrow and it makes you cry in joy."

'A life dedicated to music'

Mr Pappano pays tribute to her artistry: "This is a life that's been dedicated to music so her sound is one of all her experience, all the moments that she's been on stage, that's she's practiced, that she's been together with other musicians."

Brahms collaborated on the concerto with violinist Joseph Joachim - and paid tribute to his friend's Hungarian roots with the Hungarian-themed final movement.

Kyung Wha Chung explains: "His last movement is gypsy, zinga, so Hungarian and so I thought I have to really bring the Hungarian flavour in the last movement. When I discussed this with Pappano he got it immediately and his eyes just lit up and the way he just lived it and I just have to put the icing on the cake."