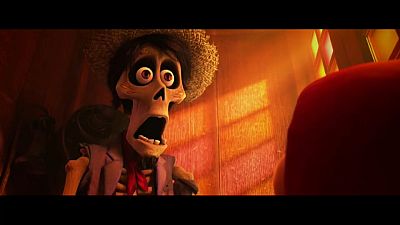 Disney and Pixar have teamed up to go down Mexico way in their latest joint offering and “Coco” explores the culture and tradition of the country and one of its keynote anniversaries, the Day of the Dead.

“The Day of the Dead is such an essential tradition. I would invite everyone in the world to embrace it because it is a reflection of death and life. It gives you a stronger sense of being, of memory, of history, of just who you are and who you want to be,” says Gael Garcia Bernal, who plays Hector with gleeful malevolance

Can we expect more pixie dust from Pixar’s main man? This is not John Lasseter’s first animated rodeo.

“In the end we wanted to make a film that every audience in the world no matter what age you are or where you live, you’re going to love this movie,” he boosted in typical style.

Co-Director Adrian Molina has been a staple of the studio for a decade as an animator, story artist and screenplay contributor, but this is his first solo feature writing credit, and turn behind the camera. Sharing the shoot is Lee Unkrich, who won the animation Oscar in 2010 for “Toy Story 3”.

The movie is on worldwide release now