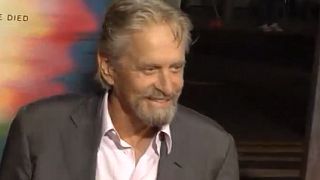 Twenty seven years after the original movie proved box-office gold, Flatliners has been resurrected with a new cast and a new director.

The remake about medical students investigating the afterlife is directed by Niels Arden Oplev, the man behind the Girl with the Dragon Tattoo, and features Ellen Page, Nina Dobrev, Diego Luna, Kiersey Clemons, and James Norton. It is produced by Michael Douglas who also produced the original back in 1990 which starred Kevin Bacon, Julia Roberts, William Baldwin, Oliver Platt, and Kiefer Sutherland.

Before you see them in theaters this weekend, get to know the #FlatlinersMovie cast in this rapidfire Q&A! https://t.co/hh5uMMWsB4pic.twitter.com/hlxmtvoWBI

“It’s a good combination between being a psychological thriller, which unfortunately sounds tame in the age of horror movies and what they’re doing, but it’s a really good opportunity to get immersed in the characters and really take care of what’s going on and then we’ve got our fair share of surprises that are up there,” explains Douglas.

The original film took over $60 million at the box-office with a budget of just $26 million.