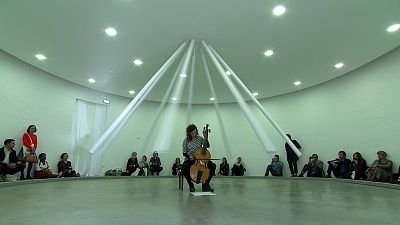 Explore modernity via art! “Floating Worlds” is the theme of this year’s Biennale of Contemporary Art in the French city of Lyon. This is the second of three of France’s most important art events examining the concept of ‘modernity’.

Many works of art evolve around ideas of fugacity, movement and notion of time, and are designed to encourage a broadening of the perception and conception of today’s world.

The Austrian artist, Susanna Fritscher, made a sonorous installation of rotating plastic tubes, and for the Biennale, the Austrian contemporary musician, Eva Reiter, improvised to the changing sounds of the tubes.

“Maybe it’s not about expressing an idea,” says Susanna Fritscher. “It’s more about creating something in a room that you can’t hear to begin with, and when you start to hear the sound it changes your perception of the room.”

“1968 The Fire of Ideas” is the title of Marcelo Brodsky’s Biennale contribution. The Argentinian conceptual artist and Human Rights activist, who mixes photography and painting, wants to focus on the 1968 protests which started a worldwide escalation of social and political conflict.

“I think that 1968 ideas influenced all of us, all the coming generations with an aspiration of a better future,” insists Marcelo Brodsky. “At that time we thought that the future would be much better, something that today we are not sure will happen.

The American artist, Ari Benjamin Meyers, who lives and works in Berlin, is a trained composer and conductor. He created an ephemeral rock group with art students who are also partly musicians. They rehearse throughout the Biennale, give one concert and then they break up – nothing is recorded.

Julien Creuzet was born on the outskirts of Paris, grew up on the Caribbean island of Martinique, and today, works and lives in Paris. Here, the visual artist and poet shows a composition of sculpture, installation and textual intervention, reflecting his own experiences and the relationship between Martinique and Europe.

“Here you can find many objects which represent the complexity of the world in which we live,” says Julien Creuzet. “For example, our relation to immigration, to war, to famine, to colonisation, de-colonisation, neo-colonisation. And as a matter of fact, all those elements are part of what makes the world we live in.”

Across the city, the exhibition showcases the works of over 80 artists from 23 countries, alongside classic art masterpieces of the 20th century on loan from the Centre Pompidou in Paris.

“Internet and social media have drastically changed everyday life. Up until January you can see in this Bienniale how international artists interpret and comment on our modern world,” reports euronews’ Culture Editor Wolfgang Spindler.