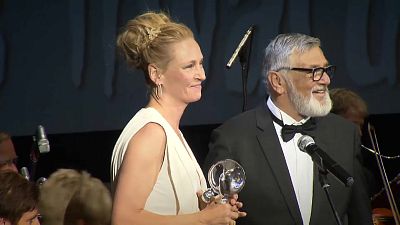 The Karlovy Vary film festival in the Czech Republic is one of the oldest, and in this its 52nd year has kicked off with a slasher film theme, with women suspended in plastic bags that filled with blood. The opening ceremony honoured iconic Quentin Tarantino actress Uma Thurman, who received a crystal Globe.

“International film festivals serve such an incredible cultural purpose for all of us today, especially as people seem to have forgotten how to listen to each other and so supporting film, supporting the exchange of movies on a cultural level is so important,” said Thurman.

“Festivals are great places to visit because of the people and the atmosphere and it’s really the place for people that love movies and they love actors and it’s really pure celebration. it’s a nice treat. Especially in a place like this that has such a prestigious history, if you feel like you’ve been a part of that in some way you feel like a lot of your hard work has paid off,” said Affleck.

Affleck’s new movie is “A ghost story” reuniting him with Rooney Mara and director David Lowery, who previously shot “Aint them bodies saints” with the duo.