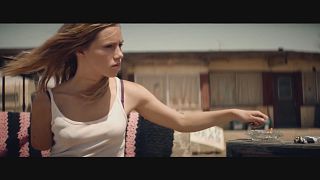 The much anticipated follow up to Ana Lily Amirpour’s ‘A Girl Walks Home Alone At Night,’ ‘The Bad Batch’ is everybody’s idea of a nightmare, lost in a Texas wasteland Arlen, played by Suki Waterhouse, is captured by a grisely group of cannibals.

The director spoke about the casting of Suki Waterhouse came about :“I guess it’s just one of those things, like love. You can’t, you can’t really intellectually fully explain it. She just like went on tape and auditioned for me and I think my mouth was kind of just hanging open a little. Like that’s the one. Yeah, you know.”

#ContestTime RT for a chance to win a pair of TIFF_net</a> tickets to <a href="https://twitter.com/Lilyinapad">Lilyinapad’s #TheBadBatch starting June 23! 1 winner on June 21! pic.twitter.com/QLIBLqYKr0

Reeves spoke about his role in the film:“It’s a rock ‘n’ roll movie with a wonderful director, she had this wonderful, beautiful script, a kind of love story. And I play a kind of leader, mayor, boss, cult leader in a kind of dystopian prison.”

So if you have a taste for Cannibalism and dystopian love with violence ‘The Bad Batch’ is right up your alley, out now.