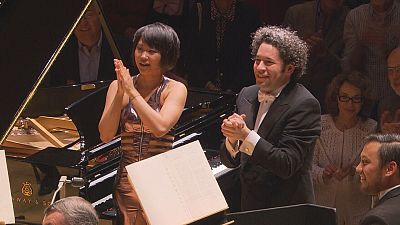 At an association of benefactors: Yuja Wang and the L.A. Philharmonic with Gustavo Dudamel at the helm conquered the Walt Disney Concert Hall with a breathtaking performance of Bela Bartok’s first three piano concertos.

“It’s one of the most difficult pieces to conduct,” Gustavo Dudamel Conductor and L.A. Philharmonic Musical Director told euronews. “To play, of course (pointing to Yuja Wang) but also for the orchestra to play, to put together all that amount of information.”

Accelerating faster and faster is a typical pattern with Bartok with characteristic features from Hungarian folk music really emerging. At one point Yuza’s fingers move so quickly our cameras have difficulty capturing them.

“Everything happens so fast that’s why it’s so difficult, his music,” virtuoso pianist Yuja Wang explained.

“It’s hard for the fingers but it’s also hard for the mind to catch up, which partly explains why he’s not the most popular composer. But he’s just very uncompromising artistically and in terms of like he has his golden ratio, the way he’s so special about the form and timing. Basically he’s a control freak I think!”

“In the first concerto you have a special element with the rhythm. Rhythm became lyrical. You know, percussion instruments became melodic, a dialogue between the piano and the percussions that is unique”.

“And these kinds of things are very mysterious. You are not used to listen to a ‘tamburo’ (drum) play a melody.”

Yuja Wang
“He uses the colour of percussion, I think he’s creating a different sound world with percussions.”

Ever since their first collaboration four years ago, the two musicians discovered an obvious affinity.

“This concerto is just basically impossible and we just get it in the first rehearsal and just energy and, yeah, something telepathic if you are on the same wave length, right? I guess. I don’t know what he thinks!”

“We work directly on the stage, sometimes we don’t talk before the rehearsal and we go and we listen to each other, you know it’s this beautiful interaction of a natural relation that is really good, natural artistic relation.”

The Piano Concerto No. 1 opens a cycle of three series of concerts at the Walt Disney Concert Hall which combine each concerto of the Hungarian virtuoso with compositions by his compatriots and contemporaries Stravinsky and Janáček.