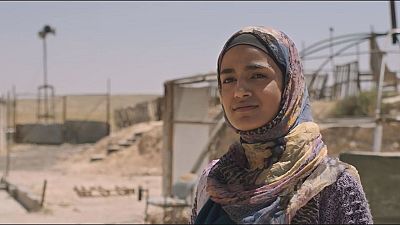 ‘Sandstorm’ the movie focuses on Layla, a young Bedouin who left her village to study in a nearby town. She returns home with her father who is going to take a second wife.

Her outlook has changed and as she grapples with the conventions of her community her life is turned upside down upsetting her loved ones.

Euronews critic Fred Ponsard met the director of the movie Elite Zexer. The 36-year-old Israeli also wrote the film. The creative spark was visiting Bedouin villages with her mother who was a photographer. The movie took nearly ten years to make.

“I couldn’t cast Bedouin women because they are very traditional and if you took a photo of a woman, you can only show it to her and to the very immediate family. so, I knew from the beginning I have to choose, to go to the Palestinians, teach them as much as I can the culture and also how to speak cause it’s the same language with different dialects. so we casted all over Israel and outside of Israel,” she told euronews.

Sandstorm is anything but a movie where good and evil collide. There are no heroes or villains. It is above all a film about women, the conditions under which they live and the conventions which dictate especially in a Bedouin community. Men are all powerful. One critic said Sandstorm had the feel more of an anthropological study than a traditional drama.

“Layla is growing up in this film in the very simplistic universal growing up story of a girl who worships her father and learns during the film that he is a person that can’t do anything. In the beginning, she thinks I can be and do whatever I want because Dad will help me and throughout the film she realises that Dad has limits, and if she wants to be or do something, she’s got to get it for herself. No magical Dad is gonna come and make everything right,” explained the director.

Layla falls in love with a young Palestinian from another tribe Marriage is impossible. She is up against the entrenched views of her parents. The battle seems to be lost before it has begun.

“The Bedouin community that I met, are going to through a big change, right now. They’re opening up to a very modern world while they are still try to understand how they preserve everything that they love about their tradition.

Sandstorm has has had showings at festivals around the world and last year was awarded the Grand Jury Prize at the Sundance Festival which is regarded as the Mecca of independent movies.

It was applauded in Israel too where it was well received by the public and rewarded by the movie industry.

“We were extremely happy with what happened… The movie was viewed by Jews and Arabs and Bedouins. And I received so much emotional responses from viewers and from everybody, from the film people also because at the Israeli Academy Awards called the Ophirs, we won Best Film, Best Direction and a bunch of more awards. This year has been so amazing. I feel very lucky,” she enthused.

Sandstorm is a movie which reveals a culture which for many cinema goers will be completely unknown. It is a real ‘tour de force’.