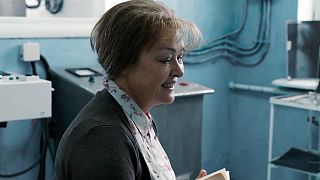 ‘Zoology’ is the story of Natasha, a middle-aged woman stuck in an unhappy daily routine, who one day grows a tail, which, as you can imagine changes her life.

It is the second feature film of young Russian filmmaker Ivan Tverdovsky, who won considerable critical acclaim with his award-winning debut ‘Corrections Class’ two years ago.

Euronews met up with him at the Marrakech film festival where ‘Zoology’ was shown as part of the official selection. So how did the idea of a story with a tail develop?

“We were arguing amongst ourselves, myself and a group of friends because I thought that someone would be really offended if they saw a person with a tail in the street – the person with the tail might cause trouble, people might call the police, beat him up and so on.

‘But there were other people who said ‘It’s not like that, because people are much more likely to be kind to such a person and accept him.’ So I thought that would be the starting point to talk about how we relate to each other in society, that the appearance of the tail would allow us to discuss this,” the director explained.

For Tverdovsky, ‘Zoology’ is a celebration of individualism and a critique of the intolerance expressed towards those who are different.

“For example, disabled people cannot go out of their apartments, homosexual people are afraid that their colleagues or their bosses might find out about their sexual orientation, lots of people are starting to hide from reality inside bubbles, so the story about the tail is all about that,” he added.

This is lead actress Natalia Pavlenkova’s third film under the direction of Tverdovsky.

“This film is like a Russian doll, there’s a big one, inside there’s a smaller one, and so on – each person sees something different in it: happiness, sadness, etc,” she opined.

As ‘Zoology’ prepares to roll out in selected theatres across Europe, Ivan Tverdovsky is putting the final touches to his next project, a documentary about the Russian police force, due to be released later this year.