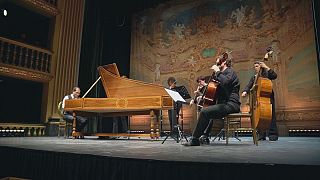 How can art and culture play a leading role in an epoch obsessed with itself and the pursuit of instant gratification, narcissism and financial crisis?

Those are the central questions at the World Summit on Arts and Culture in the Maltese capital Valletta.

Kicking off the 7th World Summit on Arts & Culture in beautiful Valletta, Malta! #ArtSummitMaltaifacca</a> <a href="https://twitter.com/ArtsCouncilMLT">ArtsCouncilMLTpic.twitter.com/DoGuLxIq4z

The programme director is Nina Obuljen: “What we learn in international gatherings is that we in Europe know that we are going through a crisis because we fear that we are loosing some elements of our life and society that were taken almost for granted, but in other parts of the world, especially when it comes to arts and culture, where there is no cultural policy, there are no support schemes; there is no concern about the status of the artist and their value in the society.”

The impact of art and culture to affect change either politically or socially is difficult to assess, but art, literature and music survive and even prosper in the most dreadful situations, like the war in Syria.

Rana Yazaji is is the managing director of Culture Resource:“It is our role to create parallel narratives to say how arts and culture could change a lot, could change what is happening in refugees camps. Arts & Culture can’t build houses for people, but it can give hope. We can create memories together and we can imagine another future together through arts and culture.”

Iranian harpsichordist Mahan Esfahani performed in Valletta, based in Prague since the Iranian Revolution in 1979, he believes artists need to stand together to defend freedom of expression:
“Too often we musicians don’t really pay attention to visual art, visual artists most certainly don’t pay attention to musicians, people in dramas don’t pay attention to artists and you know, we have to realise that we have the same friends; we are doing the same thing for society, we also have the same enemies too. So, you know its important that we are supportive of each other and I think, things like this summit are very positive in that respect.”

Marina Barham is the general director of the Harah Theatre based in Beit Jala in the West Bank.

The group emphasises human rights, democracy and freedom of expression.

She explains how art changed the life of one young Palestinian refugee: “This young man always struggled with whether to go and throw stones at a soldier or at a checkpoint, but he felt if he did that he would loose his life. So, he decided to enroll in a theatre training and now Murad has a masters degree and is travelling all over the world; he is telling the story of the refugee camp, he is telling the story of Palestine and he is trying to achieve justice for his country through culture and arts.”

The World Summit on Arts and Culture, launched 15 years ago by the International Federation of Arts Councils and Cultural Agencies in Australia, has a vision of a world in which arts and culture thrive and are recognised by governments and peoples for their contribution to society.

Sarah Gerdner is the executive director of IFACCA:“The roots of this go out very far after this event. So while it is quite focused to just three or four days with a very select group, the impact I think is enormous and it spreads out to the world as everyone returns back to their home countries.”

Kris Spiteri is a member of Kafena:
“If you go through the history of the world you see that in every protest group there is a song – so definitely art is very important, even for identity, who are we, we are Maltese, we have these melodies, this is me that is part of us – I have a saying, everything is political, so why not art?”

Euronews reporter Wolfgang Spindler is in Valletta for the summit:“Power to arts and culture that is the credo at this international gathering in Malta a credo which will become reality when Valletta serves as the culture capital of Europe in 2018.”