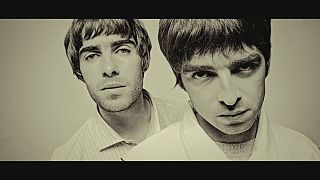 The team behind last year’s Oscar-winning documentary on Amy Winehouse has turned its lens on one of the most iconic Britpop bands of all time.

Everything's emotional. Life's emotional and if it's not, you're not living. So yeah, it was emotional but we get over it.

Named after Oasis’ debut single, ‘Supersonic’, the film kicks off with the band’s birth in 1991, and takes an in-depth look at the often tumultuous relationship between brothers Liam and Noel Gallagher.

The band finally split up after yet another backstage fight in August 2009.

According to the director of the documentary, Mat Whitecross, Liam Gallagher described making the movie to the therapy he never had.

“Everything’s emotional. Life’s emotional and if it’s not, you’re not living. So yeah, it was emotional but we get over it. There was more euphoric moments than like whingy, bad moments. Pretty euphoric the whole thing,” said Liam at the film’s London premiere. Noel didn’t turn up.

The Gallagher brothers both acted as executive producers for the movie, which features previously unseen footage and interviews with Liam and Noel. For Whitecross, who is a huge Oasis fan, it was important to also show the love between the two brothers.

“I think both of them were quite surprised by how affectionate they were to each other. So I’d come back and say, ‘Well, last week I spoke about this with Noel (Gallagher). I talked about the origins of the band and he reminded me that it was your band, Liam’. And Liam’s like, ‘No he wouldn’t have said that.’ I’d say, ‘Obviously, I can play it back to you’. I think they were both surprised at how generous they were about each other. So, Noel talked about what a great frontman Liam was, then Liam talked about what a great songwriter Noel was. I think all those kind of things were the initial starting point, and then, inevitably, the more you talk then some of the bitterness comes out, but I think everyone knows that about the Gallaghers, you know, that’s part of the package,” said Whitecross.

Out now, ‘Supersonic’ has garnered mostly critical acclaim, though some have said it is disappointingly coy on the band’s decline and breakup.

After Oasis, Whitecross is now working on a film about British band Coldplay.