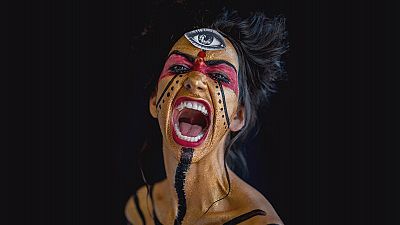 He is also an artist and he collaborates with painters he meets around the world.

He spoke of his modus operandi:
“We go to Ibiza for around three days, to work not on a canvas, but a body, it breaks the rules, the painter usually looks at the model then paints on canvas. Here they touch the model with pencils, with hands or with a sponge. I not here to direct the work, I photograph the final piece.”

For the painters its a fresh adventure working on a living canvas.

Eric Ceccarini works with the same models on the project:“The model is important because they have to understand what the painter wants to express on the skin, alter the positions to best showcase the paintings.”

Next year he will be honored in Liège with a show in the city’s cathedral where more than 80 works will be shown.