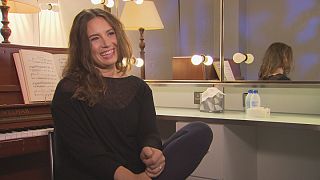 Sonya Yoncheva has taken the opera world by storm: The Bulgarian soprano who started as a baroque singer and won Operalia in 2010 is on an extraordinary musical journey.

“When you sing baroque or the early music above all you are very much connected to the words and to the declamation and I’m a huge fan of the text. If you have something to say you have to say it with the right accent. I’m trying to deal with opera singing in each period, so in baroque, in early music, bel canto or verismo in the same way: the text!”

Yoncheva wants to go wherever the music takes her.

“We always have the impression that if you’re a baroque singer they put a sticker on your face and they say: ok you’re a baroque singer and that’s it and you can’t be anything else. I believed I could be whatever I wanted and Operalia was really the door to this world,” she says, “to the world of the bel canto, to the world of Covent Garden and the Metropolitan, all these theatres and I’m so so grateful I did it.

I want to live life and also music to always surprise me. I think I will go to the bel canto, this is completely obligatory and then of course some verismo parts. I have Puccini, Verdi. I have all the colours. I even have early music in the future so I’m very very much excited about it.”