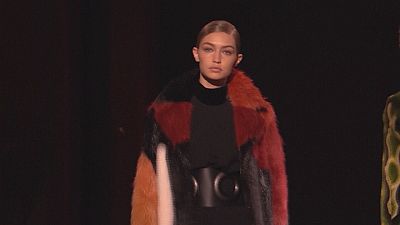 Tom Ford kicked off New York Fashion Week in the most unusual manner.

Instead of presenting next season’s fashion like other designers, he showed off an Autumn-Winter collection that hit the shelves the very next day.

Ford played around with textures, using sequins, wools, leather and mock furs in a muted, autumnal colour palette, with a dominance of browns, burnt oranges, grays and blacks.

Much of the collection was practical, with heavy coats perfect for colder weather, and thick set boots.

A new collection isn’t all Tom Ford is staging this September.

Nicholas K played with desert colours and sustainable fabrics for his Spring-Summer 2017 collection.

The New York-based brand said the urban-nomad look was inspired by the 2014 drama ‘Theeb’, about a young Bedouin boy who must fight to survive in the desert.

Nicholas K translated the film onto the runway dressing the models in neutral-coloured loose garments such as draped pants, long flowing capes and asymmetrical jackets in a variety of fabrics.

Each look was paired with over-sized visor or floppy hats and ultra-high ponytails.