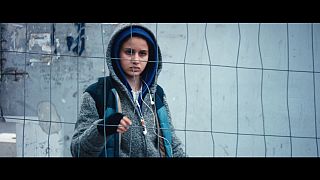 The film is out now in France.

It follows the fortunes of two friends who crave money and power in a tough Parisian neighborhood.

Then a young dancer begins to draw one of the duo into a different world.

The director remembers the moment when she became addicted to art:
“I had a supervisor called Grégory Protsche who gave me ‘Medea’ by Pasolini and book called ‘Journey to the End of the Night’ and from then my anger served art.”

The film was inspired by the Paris riots of 2005 and the dubious values of Western society as Houda explains:“Dounia is a slave to the money God, she desires success and flashy cars and plans a dream trip to Phuket. But its necessary to reconnect to our spirituality, for me in the society we live we have to question our values.”

It was through the workshops that she was able to cast ‘Divines.’

The film is now out in France and plays at this years Toronto Film Festival.