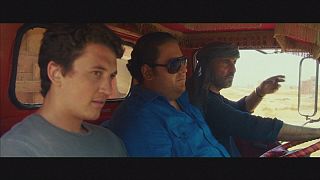 War Dogs tells the true story of Hill and Teller, two friends in their early twenties living in Miami Beach during the Iraq War who exploit a little-known government initiative allowing small businesses to bid on US military contracts.

Starting small, they begin raking in money and living the high life. They soon get in over their heads when they land a $300 million Afghan military contract. The deal puts them in business with some very shady characters, some from the US government itself.

“I think it’s just a story that’s so crazy you can’t believe it actually happened. If you read a fictional screenplay about this story, you wouldn’t make it because you’d go, ‘oh, it’s a cool script but no one would believe that actually took place,’ said actor Jonah Hill.

“So to me it was just this unbelievable story about people kind of abusing the ‘American dream’ and the character was just kind of too insane”.

Director and Co-Writer Todd Phillips, said he was interested in the financial aspects of war and conflict:

The screenplay is based on a Rolling Stone article entitled “Arms and the Dudes,” by Guy Lawson. Though a buddy comedy at heart, the film does expose the insidious underbelly of the arms trade through a most unlikely true story.

Read the incredible true story behind the movie #WarDogshttps://t.co/txk6HoSMr0

“War Dogs” began its global theatrical roll on 18 August and will be released in the UK on 26 August 2016.