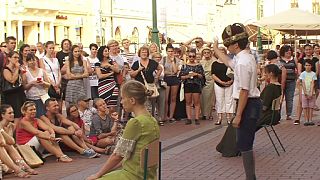 “All Szeged is a stage” during THEALTER , the international meeting of free theatres. The festival kicks off on July 21st for 9 days, Eastern and Southern European theatre companies are invited to perform in the Hungarian city.

The festival is organized by MASZK , an association promoting experimentation and innovation in performing arts. Erika Kocsor reported:

“In 25 years the festival’s founders, the MASZK Association, have presented more than 200 innovative theatre troupes from 30 countries here, many of them for the first time in Hungary.”

The heart of THEALTER is the ALTERRA – a Contemporary Performing Arts Center in the Old Synagogue of Szeged. The festival’s director explained what makes it so unique:

“Perhaps the fact that the festival can keep the past alive and vivid while involving new generations into the theatre circuit. We give them space, support and we manage them..”

Diary of a madman

The festival opened with Gogol’s “Diary of a Madman” by Viktor Bodó, starring multi-instrumentalist and actor, Tamás Keresztes.

A respected figure of the independent theatre scene in Hungary, Bodó gave us a taster of this play about a low-ranking civil servant, who strives in vain to step out of his social class:

“So Gogol said that there is only one way to get out of a situation like this, if this protagonist goes mad, in this way he can be free.”

“A Short Tale of the Antichrist”

Themes raised by the Serbian company BITEF Theatre are also hot topics. “A Short Tale of the Antichrist” is based on Vladimir Solovyov’s 1900 philosophical work which explores how the East and West’s perception of each other as Antichrist is paving the way for the real thing.

“The point is that everybody who is watching the show can ask themselves what their approach to the church, the faith, is, whether they are a fanatic or a realist in this sense, and what their opinion is about all this?”

The struggle to fund the arts

Hungarian funding for the arts is drying up. Independent artists are receiving less support particularly since the Orbán government took office in 2010. Some independent theatres adapted to a more comercial approach to survive.Practitioner and Professor Sándor Zsótér said:

“The independent sphere has collected an incredible amount of knowledge about how to sell their products, how to submit applications.”

Luckily there are always emerging talents eager to learn from the more seasoned and offer new approaches.

Since 1991, THEALTER has been making freedom and independent-thought tangible through the medium of theatre. And you can even get a free hug… More info is available on the festival’s home page.