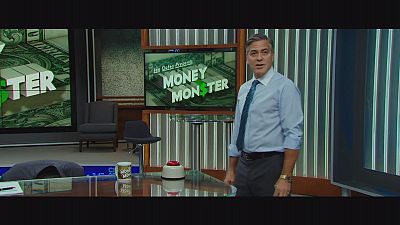 Calling a movie “Money Monster” seems to be asking for trouble especially if it bombs at the box office, but rather than tempt fate Sony have hired the biggest of box office guns, George Clooney and Julia Roberts, to power this crime thriller, directed by Jodie Foster, which must have helped with the casting.

The name is Lee Gates, the show is Money Monster. Without risk, there is no reward. Should I sell? Should I a loan? GET SOME BALLS!

Financial TV host Clooney and his producer Roberts are put in an extreme situation when an irate investor who has lost everything takes over their studio.

“Money Monster” is screening in Cannes out of competition.

“We are specifically examining finance as entertainment and how that can be so misinterpreted for people sitting at home watching a show thinking that they’re being informed when really they’re being more entertained than informed,” says Julia Roberts.

George Clooney, whose father was a TV news anchor, takes a slightly different tack. Rather than focus on the capacity to mislead an individual into losing money, Clooney looks at how TV news can mislead us all:

“What happens is in a 24-hour news cycle we’ll keep hearing this drumbeat of these things, these elements, and you’ll start thinking ‘Oh my god, the world’s coming to an end. ISIS is going to be on our front step’, when the reality is that it needs to be put back in perspective. I think that’s part of the thing that happens in news and journalism – just a byproduct of 24-hour news,” he says.

The film is a departure for actress-turned film maker Jodie Foster from the more intimate, character-driven films she has made before. But as an actress she was and is no stranger to action roles.

“Well I really appreciate my acting career. It was amazing and it is such an incredible film school and I’m proud of the movies that I was involved in and I got to work with incredible technicians. But being a director has always been my dream. It’s something that I’ve always wanted since I was a little girl, to have the full vision of the film and to have my signature to be the one for better or for worse – maybe it’s terrible – but it’s a full signature on the product,” she says.

Foster is well-served by her cast and screenplay and knows how to build and release tension, providing some excellent twists along the way, but she also tackles several big themes some critics say get muddled in the mix.

‘Money Monster’ rolls out worldwide through May and June.