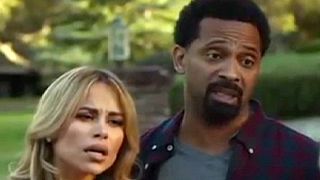 Meet the Blacks sees Chicagoan Carl Black move his family to LA after coming into unexpected funds, but while in Beverly Hills they encounter rather unruly neighbours.

You have to make light of everything, no matter what is bad ... if you can't laugh at it, it's gonna to kill you.

The film parodies sci-fi series “The Purge” and is set in a future America where, every year, there is a 12-hour period during which all crime is legal.

The dark comedy, which premiered in Hollywood, is the first leading film role for comedian Mike Epps, who plays Black.

Mike Epps, actor: “You have to make light of everything, no matter what is bad out here, if you can’t laugh at it, it’s gonna to kill you.”

Director Dean Taylor wrote the movie at a time of strained race relations in the US and takes ample aim at spoofing stereotypes.

Deon Taylor, director: “What I was doing at the time is that I could feel the tension coming and what I felt I should do with the writing was, basically, make fun of it. People are so uptight right now and racism is effecting just normal, everyday people to the point that I’m like, if you can laugh and get into the theater and make fun of something that is as ignorant as racism I felt like that’s the best way to care and make people come together on something fun.”

Snoop Dog: “It’s a movie that is made to make people have fun and laugh and enjoy the day. That’s what it is, it’s a movie.”