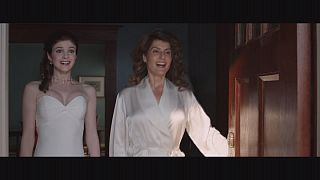 It’s been nearly 14 years since ‘My Big Fat Greek Wedding’ was released. With a budget of just $5 million, it became one of the most successful independent movies of all time and one of the highest ever grossing romantic comedies.

Now the sequel is finally hitting the big screen. It’s the brainchild of its star and creator Nia Vardalos who earned an Oscar nomination for the screenplay.

“It was actually my fault that the sequel took so long,” she explains. “They asked me immediately after the first movie to write the sequel and I said no because I had written that Toula was a mum, and I was actually in a very private struggle to become a mum…. Happy ending, I became a mum and here we are, first day of kindergarten, I was that mum, crying so hard that people were, I’m sure, backing away from me. And another mother, I think in an effort to calm me down, said something which put me in a state of panic. She said, “Oh come on, in 13 years they’ll go off to college and leave us.” And I went (gasps) and that’s when I realised I had morphed into my own suffocating ethnic parents. And that’s when I got the idea for the sequel.”

After spending most of their time focusing on their teenage daughter, who is heading off to college, Toula and Ian are facing marital problems while also having to deal with yet another Greek wedding – this time, an even bigger and fatter one.

While fans of the first film might have been eagerly awaiting the sequel, it looks set to disappoint, with reviews ranging from an embarrassingly awful retread to Bigger, Fatter, and Not Necessarily Funnier.

‘My Big Fat Greek Wedding 2’ is on global release from now.