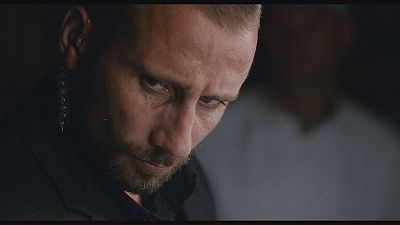 In ‘Disorder’, Matthias Schoenaerts plays Vincent, an ex-soldier suffering from Post-Traumatic Stress Disorder. Vincent is hired as a bodyguard to protect the wife and child of a wealthy Lebanese arms dealer while he’s out of town.

The Belgian actor was so obsessed with accurately portraying his character that he started losing sleep over it. “It’s a very – how do you call that? – sensorial condition. So I’m like, ‘I need to experience that, be in that zone when you’re constantly paranoid, where your senses work at 200 percent.’ You hear more intensely, you feel more intensely. And so, because I got so anxious I stopped sleeping, but not as a choice. And, all of a sudden, I started to have these symptoms,” he explains.

Behind the apparent tranquility of their lives, Vincent perceives a threat… but the question is: is it real or is it all in his head?

Originally released under the title ‘Maryland’ at the Cannes Film Festival last year, ‘Disorder’ is French film maker Alice Winocour’s second feature film. She said she wrote the script with Schoenaerts in mind: “I knew he could find this borderline state and it’s something we really worked on. He was not sleeping on the set and all this stuff, but we did also a lot of work, for example on his body, with all the tattoos and stuff, and scars, and he really immersed himself in the part and was devoted to the film. It was an incredible experience as a director,” she said.

Matthias Schoenaerts has received near unanimous praise for his role in the film, which has otherwise garnered mostly critical acclaim.

Co-starring Diane Kruger as the woman Schoenaerts is hired to protect, ‘Disorder’ is on release across Europe from now.