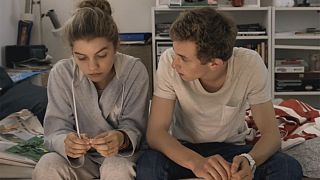 “From a theme often revisited in filmmaking Guillaume Senez has composed an extraordinarily emotive and well observed work. The Franco-Belgium film ‘Keeper’ is our pick of the week.”

The film revolves around two adolescents.

Fifteen-year-old Melanie discovers she is pregnant, initially Maxime is horrified by the idea, but eventually warms to the prospect and they decide to keep the child.

Melanie’s mother is dead set against it.

It transpires that is just one obstacle the young couple face.

The director shoots the film from the perspective of Maxime a young man full of doubt, but determined to support his young family using his skills as a talented goalkeeper.

Although the film features two adolescents it is not a teen movie. The film explores universal themes.

The script is close to perfection, the acting is superb and the movie entrances until its unexpected ending. Enjoy.

The film is out in France on March 23.