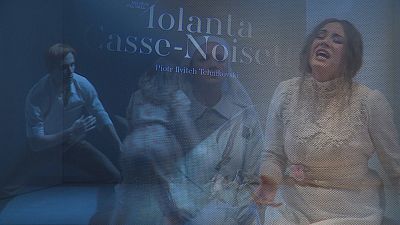 The curtain has risen on a Tchaikovsky double bill at the Paris Opéra:

I've managed to love her (Iolanta) totally because this girl is so pure - she's got her own, preserved, world

The one-act opera ‘Iolanta’ and the classical ballet ‘The Nutcracker’ are being performed together in the production ‘Iolanta/Casse-Noisette’ (‘Iolanta/Nutcracker’), which opened on 10 March.

This pairing may seem new, but it is in fact anything but. The two works were performed together at their premiere in 1892 in Saint Petersburg.

But while ‘The Nutcracker’ has long been one of ballet’s biggest box-office draws, ‘Iolanta’ is not often performed nowadays.

The opera is a fairy tale about a princess, the eponymous Iolanta, whose blindness is cured by love. At the start of the story, she does not know that she is any different from the people around her, not knowing what it is to see.

Star soprano Sonya Yoncheva has been bringing the character to life on the Paris stage.

“I had to understand Iolanta’s world. How could one not know the existence of light, the existence of colours, of objects….and also believe that everyone else is in the same predicament? Still, I’ve managed to love her totally because this girl is so pure – she’s got her own, preserved, world,” enthuses Yoncheva.

Production director Dmitri Tcherniakov is renowned for breaking down classical works and reconstructing them. His take on Tchaikovsky’s masterpieces is a naturalistic production that strips ‘The Nutcracker’ of much of its usual sweetness.

Conductor Alain Altinoglu describes Tchaikovsky as “the most Western of Russian composers.”

“He spoke French, Italian – there’s definitely a Western element in him. What’s Russian is his sound, his way of combining sounds in an orchestra; it’s his giving the lyrical, moving music to the strings… or the way the brass play together… it’s his sound and the harmonies he uses that make his music sound really Russian,” Altinoglu explains.

For Yoncheva, who is from Bulgaria, the role of Iolanta has brought new challenges, but it has a ring of familiarity to it as well.

“This is my first ‘Slav’ role,” she says, “so I discovered a sound I wasn’t familiar with before. It gives me the agreeable impression of being at home, also because half the cast here comes from former Soviet countries, and we’re so happy to share the same sense of humour, the same words I used to hear when I was a little child… so, I’ve really felt like being back home in this production!”

The opera is framed by the story of the ballet – among the gifts for ‘the Nutcracker’s’ Marie there’s also a performance of Iolanta, with the singer in the end embracing the young heroine.

“At the end of the opera – when Iolanta is no longer blind, when she can see the light – the orchestration too seems to open up towards the light. And this is what you have at the beginning of ‘The Nutcracker’ – something clear, almost childish. Shifting fluently from one piece of music to the other is the most challenging part for a conductor,” says Altinoglu.

'The Nutcracker' unwrapped as never before