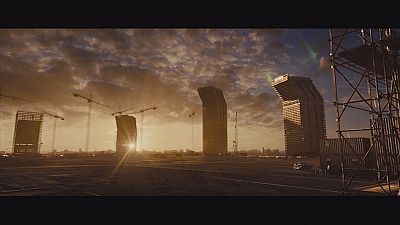 The dystopian thriller dissects the residents of a luxury high-rise apartment block. The rich occupy the upper floors while the poor, cut off from society, live below.

Hiddleston pays the part of Dr Laing: “I think there’s something in the way our society is structured, which will always be relevant until it changes, which is that people feel a justified anger about being asked to stay in their lane. They are born into a position in society and they’re expected to stay there and the analogy is that you live on a particular floor of the high-rise and you’re expected to stay on that floor.”

The result is the regimented social strata falls apart and the inhabitants become tribal and violent.

The cast believe Ballard’s observations are relevant and ubiquitous.

First Sienna Miller:“I could see bits of myself in almost all of the characters there, and also it’s very thought-provoking in terms of how you think you would react and I think you can’t help but watch this film and think, ‘what would I do?’. That feeling of claustrophobia, I mean I could relate to that.”

Luke Evans plays the filmmaker: “Even though the book is 30-years-old and the story was written by someone in the mid-70s, even placing the film in the late-70s it’s still reminiscent of what we experience and observe throughout the world today. Human nature and society and the class system.”