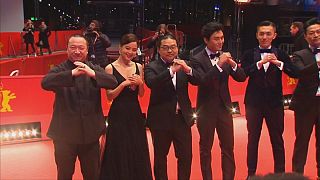 The film was shot four- years ago and the editing process took two-years.

The magic realism film is a love story set on the Yangtze River.

The director explained the idea behind the movie: “Firstly there’s a rich classical tradition of Chinese poetry. And successive Chinese Poets from the Tang Dynasty through the other dynasties to the present day have used a variety of approaches to describe, to talk about the Yangtze river.
What I feel I’ve been doing is extending that poetry by the means of cinematography.”

During the voyage, the hero reads from a book of poetry that is hidden away in a special compartment on the boat, while the screen flashes verses from famous poets of Chinese history.

The captain is also in pursuit of a beautiful woman who is both elusive and obtainable.

‘Crosscurrent’ is in competition for the Golden Bear at the Berlin Film Festival.

Julianne Moore and Greta Gerwig are in Berlin to promote the romantic comedy ‘Maggie’s Plan’ written and directed by Rebecca Miller.

“Hi, I love Berlin, what an amazing festival. I love Germany. I lived in Frankfurt as a teenager and that’s why I speak a little German.”

He co-star Greta Gerwig spoke of her admiration for Moore:
“She’s a master, she’s everything. She’s one of the best actresses I’ve ever seen work and she has such utter control and also fearlessness at the same time. “

Gerwig is a 30-something who decides she wants to have a baby and, with no relationship on the horizon, she takes matters into her own hands.