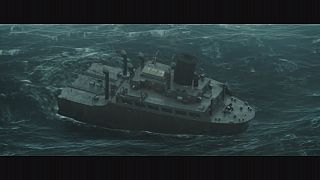 In February 1952, one of the worst storms to ever hit America’s east coast struck New England. It destroyed an oil tanker and dumped dozens of sailors into freezing conditions amid 20-metre high waves.

Craig Gillespie’s The Finest Hours is the story of their epic rescue by the US Coast Guard. Chris Pine who plays hero Bernie Webber says the role gave him a small sense of what the rescuers endured.

“These four men, including the character that Ben plays and two others, saved 32 men off an oil tanker that split in half with zero visibility and no compass on a boat that was supposed to carry 12 people and managed to get them all on shore with only one fatality. So what happened that night is extraordinary,” said Pine.

The film is a fairly straightforward ‘against all odds’ tale and Disney’s influence is all too clear according to some critics. But a sparing use of special effects adds just about the right tone to what is a compelling story.

Most of the lead actors spent time with the US Coast Guard for additional training or insight into the lives of seamen but Casey Affleck admits its did little to help his performance.

“In many cases, the boat is rocking, water is spraying in through cracks and the wind if you’re on deck, the rain machines, the wind machines and you’re taking a beating and everything you’ve learned or prepared it just goes out the window and you’re trying to stay on your feet and get the words out,” said Affleck.

The Finest Hours is out in many countries this week and will be on staggered release across Europe late this month.