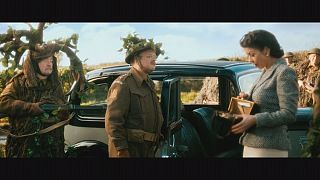 Dad’s Army – a British television institution has hit the silver screen – Captain Mainwaring and his Home Guard are on alert in Walmington-on-Sea. A spy is in the area.

Out of the blue a glamorous journalist played by Catherine Zeta Jones arrives on the scene to report on the platoon’s exploits.

The Welsh actress and wife of Michael Douglas was in London for the world premiere of the comedy. Was there extra pressure appearing in a film of such a well-loved TV series?

“Well there’s always a pressure to make any movie, you know if you’re doing a comedy you’re under pressure to make people laugh or to tickle them in a way you know. But making a movie in general’s like that but with this it was so inherently fun to do you know. Hamish did such a wonderful job on the script and it read so well, we just threw ourselves into it and had fun with it,” she told reporters.

The director is Oliver Parker. He believes the characters connect so well with the audience.

“Some of them are madly pompous and self important, some of them are completely incapable, bumbling fools, and yet they’re all prepared to do their best and some of them probably lay down their life and there’s something deeply touching about the commitment to doing your bit. I think everybody connects with that,” he said.

The television series was first shown on the BBC in the 1960s. It achieved cult status and episodes of the sitcom are still being repeated over 40 years later on national television.

The international release of the film, which features some of the UK’s finest actors starts in February.