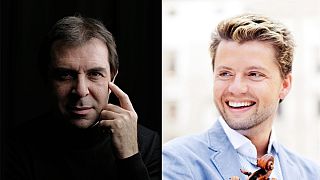 Led by Music Director Daniele Gatti, the Orchestre National de France were in New York for what was a superb concert at Carnegie Hall. For this performance, they were joined by Lithuanian-born violinist Julian Rachlin, who has been captivating audiences around the world.

This exceptional concert presents a quintessentially French work by Debussy: Prélude à l’après-midi d’un faune (Prelude to the Afternoon of a Faun), a work inspired by Stéphane Mallarmé‘s poem L’Après-midi d’un faune about a half-man, half-goat creature from an ancient Greek legend. Debussy’s symphonic poem for orchestra was completed in 1894. Shostakovich’s Violin Concerto No. 1 follows, originally written in 1947–1948 and set aside for seven years at the time when the composer was enduring the Soviet’s censorship. The work is considered one of the most technical pieces in the violin repertoire. The concert ends with a thoroughly Russian symphony: Tchaikovsky’s Symphony No. 5.”