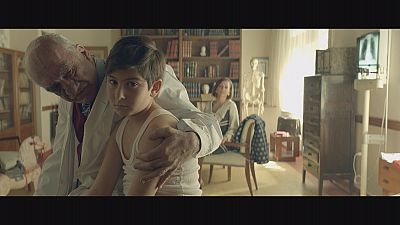 It’s been more than a decade between films for Greek director Tassos Boulmetis. His last offering, ‘A Touch of Spice,’ (2003) was a huge hit in Greece and hopes are high for his latest production, ‘Mythopathy.’

“I call it sarcastic nostalgia”

“Mythopathy is many things together. I call it sarcastic nostalgia. The story has to do with the current situation in Greece. Especially the second part of the film. The political part reflects what is happening now in our country. I can see that, because many young people tell me that they feel connected with the atmosphere of the film. What we experience today is directly connected with everything that was said and narrated in the ’70s.”

A journey from myth to reality

The film tells the story of Stavros and his journey from adolescence to adulthood in the 1960s and ’70s.

‘Mythopathy’ is almost a personal diary of the main character as he strives to make his dreams come true.

It is also a film about the role myths play in the lives of Greeks – a bittersweet comedy about first love, heartbreak and political engagement.

“What I kept from this film, is the sense of loss. The film offers you a way to face loss, with a different, imaginative and very optimistic way, new to everything we already know,” he explained.

We follow Stavros up until the moment he decides to become a film director.

In reality, he faces rejection from a number of women.

Eventually, he faces reality and discovers what he really wants from life.

Actress Maria Kallimani outlined the strong connection she felt with the film’s content.

“Watching the film, I felt that it refers to us. We live in a specific time and place. This is what determines our life. We have grown up here,” she said. “The fact that this film turns me back to my recent past, to my family’s past, offers something that has to do with my identity, with me.”

‘Mythopathy’ premiered at the 65th Thessaloniki Film Festival and is now out in Greece. Within a week of opening, 50,000 people had seen the film.