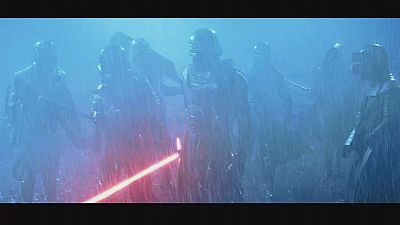 The cast of the original “Star Wars” movie came together with the stars of the new film at the world premiere of “Star Wars: The Force Awakens” in Los Angeles. After all the secrecy and speculation surrounding the plot of the new movie, the question of whether Mark Hamill would reprise his role as Luke Skywalker in “The Force Awakens” was finally answered.

Asked what it felt like to play the infamous character once again, Hamill said: “It’s nice to have a job lined up for my twilight years, it’s like a pensioner plan now that I’m a Jedi elder.”

Harrison Ford, now 73-years-old, reprises his role as Han Solo and is joined by newcomers John Boyega and Gwendoline Christie.

“It was really important that we tell a story that was existing in and populated by things and creatures and ships that felt very familiar,” explains Director J.J. Abrams. “Not for nostalgia’s sake but because this literally is chapter seven. And I hope that when you see this movie — while there are many elements that are intentionally being revisited in a kind of history-repeats-itself sort of way — the story we’re telling, the characters you’re meeting, and the beginning of this new saga, this new chapter of the saga — feels brand new.”

The Force Awakens is set approximately 30 years after the events of Return of the Jedi where the Rebel Alliance and the Galactic Empire have become the Resistance and the First Order, respectively, and follows new leads Finn, Rey, and Poe Dameron alongside characters returning from previous Star Wars films.