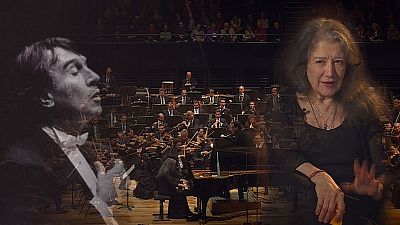 The swelling sounds of the Lucerne Festival Orchestra fill the Paris Philharmonie, at a concert to pay homage to Italian conductor Claudio Abbado, who died in 2014.

Argerich recalls their first meeting, saying: “He too had joined (Austrian pianist and composer) Friedrich Gulda’s classes, that’s how we met. At the time, he played the piano beautifully, and at Gulda’s place in Salzburg, he was asked to perform at the end of the course as he was one of the best. I think that I was on second piano,” Argerich pauses and smiles. “I didn’t really play, I accompanied him.”

Argerich continues to reminisce: “My first record was with him. I immediately thought of him. He was such a special person. And I used to be so calm when playing with him, even the most difficult stuff like Mozart – Mozart is terrible, for me – well, he could calm me down, he had a gift. And we were so close through music.

“We understood each other without speaking, that’s how it worked with us, no talking. He hardly talked. Also with the orchestra he spared very few words. If you were ever at his rehearsals, you could see he didn’t speak much. But he was there, with them – that’s the way he was.”

Lucas Navarro of the Lucerne Festival Orchestra is among the many who had the privilege to work with Abbado. He looks back on what he learned from the Maestro.

“Love, passion, hard work, sacrifice, the pleasure to make music together, to listen to each other,” Navarro says.
“This comes back to me especially when we play Mahler – it’s like a journey through many musical pieces, many moments spent with him, at a restaurant with him, travelling with him – an abundance of memories and emotions.”

Argerich concludes: “I miss him a lot, I must admit it. He was like a prince when he conducted, so aristocratic. At the same time he had a fiery personality, but also something very special… he was just extraordinary.”