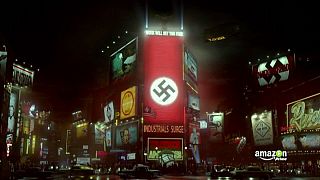 ‘The Man in the High Castle’ portrays a world in which the Axis powers dominate after victory in the Second World War.

The triumphant National Socialists and Imperial Japan divide up the United States.

Kleintank: “America’s all about freedom and liberty and all these great sayings.”

The film is based on the
1962 novel by the singular sci-fi writer Philip K. Dick.

Read it before you binge it → the full season of THE MAN IN THE HIGH CASTLE is available on 11/20 #PKD@AmazonVideopic.twitter.com/3511fx1ZOX

A pilot episode was released by Amazon Studios in January 2015 and was Amazon’s “most watched pilot ever.”

‘The Man In The High Castle’ Review: Amazon’s Alt-History Series Is A Winner https://t.co/AwmrMVoV7Qpic.twitter.com/N9TafOSjBh

Writer and producer Frank Spotnitz spoke of the new way the industry now operates:
“The Amazon pilot’s process is pretty unique because you make the pilot and then it’s shown publicly which is the opposite of the way it’s usually done in television. Usually the pilot’s just for the broadcaster to see but in this case the viewers vote on whether they like what you’ve done and decide whether to carry on with the series which was a bit nerve-wrecking. But in our case it was the most popular pilot they’ve done so it was wonderful because there was a lot of support for doing the series and actually in going forward with the series .”

‘The Man in the High Castle’ will be available from November 20 on the Amazon Prime streaming service.