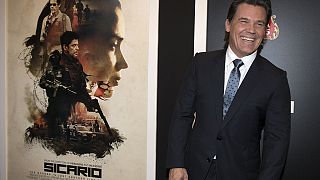 ‘Sicario’ explores the violence of the Mexican drug cartels and the equally brutal response of the United States’ authorities.

Talking at the movie’s New York premiere, Villeneuve said he wanted to get people thinking about the vicious cycle of evil: “There’s a temptation to do that, a strong temptation to fight violence with stronger violence, but knowing that it will create another kind of violence later. What is the solution? I don’t have a solution, I’m just asking the question. How can we fight evil? Do we need to become monsters like the monsters?”

Brolin plays a US government agent who employs some very questionable methods.

“I don’t think you would look at it as an actual solution to what’s happening right now,” said Brolin. “I don’t think that’s the point of the movie. The movie is about bringing to consciousness that it is happening, that it is so close, and that it is as violent as it is.”

According to Puerto Rican actor Benicio Del Toro, who co-stars as a Colombian cartel ambassador and is familiar with cartel dramas (from Steven Soderbergh’s ‘Traffic’ to Oliver Stone’s ‘Savages’), “some of the actions are justified but I don’t think that should be the idea of an eye for an eye, breaking the law, or the means justifies the ends. It’s very dangerous.”

‘Sicario’ premiered at the Cannes Film Festival earlier this year to mostly critical acclaim, with Villeneuve praised for his intelligent, beautifully composed stories of the grimmest parts of human nature.

The film is on global release from now.