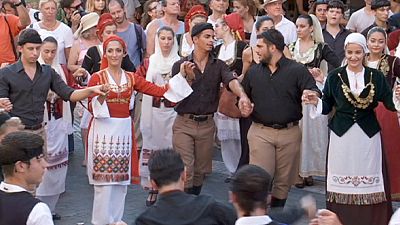 This year, for the first time, Heraklion, the capital city of Crete, played host to the Pancretan Dance Festival and Cantata.

Eleni Fasoula, Secretary of the Anogia Cultural Organisation which organises the event, explained what the cantata is all about: “In the past, if a young man was in love with a girl, he would go to her house along with his friends. They would bring their mandolins and laoutos, stand beneath her balcony and sing mantinades in the hope of seducing her.”

Despite the Greek crisis, the flow of tourists to the island has remained stable this year, according to authorities.

“Culture and tourism go hand in hand here in Crete,” explained Michalis Vamiedakis, Tourism Commissioner for Crete. “The island has a very rich cultural background. Our goal is to promote this, in order to attract more tourists and show that our island has more to offer than sun and beautiful beaches.”

This year’s festival drew large crowds of both locals and tourists.

“It’s a great fiesta,” said one woman. “Everyone is happy. Here you see how people can live together, dance together, be happy together. That’s what life is about.”

“What I really like is people’s mindset here in Crete, they are very open, very warm, very welcoming,” said another.

Crowds joined in the cantata along the streets of Heraklion, which ended in the Freedom National Stadium, for the second part of the event: the Pancretan Dance Festival.

We asked locals what mantinades, the famous Cretan songs about love, life and death, mean for them.

“In a mantinada, I put all all my thoughts on paper, whatever dark and gloomy thoughts pass through my mind, and that’s how I tell it,” said dancer Lefteris Berkis.

“We have different kinds of mantinades. Some are about joy, others about sadness, love and life. They talk about everything, but most of all about love,” explained mantinada expert Giannis Vitoros Kennedys.

Thirty-five dance groups and 700 dancers from all over the island took part in this year’s event along the theme “Crete praises its immigrants”. They performed folk dances from each corner of the island, all of which celebrate the Cretan people’s heroism, vigour and rebellious spirit.

“Our goal is to show the diversity and splendor of Cretan music and dance,” explained Nikos Vretzos, President of the Anogia Cultural Organisation. “Cretans are kouzouli, which means crazy in Cretan dialect. That is what you will see tonight at this stunning event.”

Famous Cretan musicians Vassilis Stavrakakis and Nikos Gonianakis were among those invited to perform on stage.

“Cretan music is all the rage at the moment, not just here in Crete, but in Greece at large and even abroad,” said Vassilis Stavrakakis.

“Cretan music has no boundaries. I don’t want to brag, but I have to say this is something different. There are interesting musical styles from all around the world, but ours is the best!,” enthused Nikos Gonianakis.

“Crete is not only famous for its history, its beautiful beaches and its landscapes, but also for its musical and dance tradition. The Pancretan Dance Festival and Cantata is where Cretans from every corner of the planet meet each year – a chance for outsiders to learn more about Crete’s culture and get a true taste of the island,” concluded Yorgos Mitropoulos, Euronews’ correspondent in Heraklion.