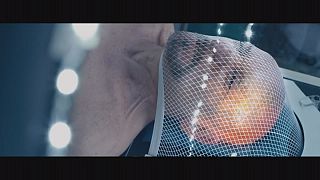 Self/less is ultimately a film about ethics.
An extremely wealthy man (Ben Kingsley) is dying from cancer, he undergoes a radical medical procedure known as ‘shedding’ that involves the transfer of his consciousness into the body of a healthy young man. However, mystery surrounds the origin of the body and the organisation that is behind it.

Self/less - uniting Deadpool and The Mandarin - is out tomorrow. Here's Empire's review: http://t.co/d39EYFf0W6pic.twitter.com/SBqK5DlHby

Ryan Reynolds plays the part of the healthy new body: “I thought it was interesting, I mean that idea that we can take someone’s consciousness and put it in another vessel and actually make it function is interesting and these guys that I am working with are saying this is actually real science, this is stuff that they are actually working on to some degree ? then it just scared the crap out of me.”

Catch the awesome @VancityReynolds in the #SciFi#Action@SelflessFilm from FRIDAY! Book here: http://t.co/t0ZESWKZHSpic.twitter.com/6okeOWHU63

“I mean you are violating a million different rules. I mean natural selection, theology all kinds of things when you are messing with this but, you have to wonder though what if Steve Jobs had 20 more years, what if Einstein had 30 or 40 more years, you know, any of these great minds or these great thinkers that produced wonderful ideas for humanity, what if they had a second chance to give some more.”

Selfless is on worldwide release this summer.