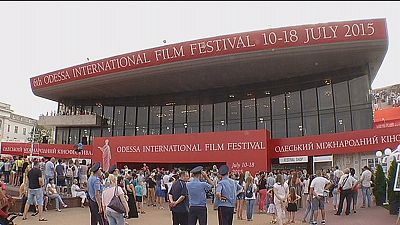 The sixth Odessa International Film Festival is underway, drawing crowds to the Ukrainian port city known as “the Pearl of the Black Sea”.

The Ukrainian film industry is in dire straights now, as all financing has been stopped

Twelve films are competing this year for the Golden Duke, the festival’s main award, while the films screened out of competition include retrospectives, exclusive premieres and the latest hits of festivals worldwide.

One of those is the “Turkish film “Sivas”,”:http://www.hollywoodreporter.com/review/sivas-venice-review-729620 which won the Special Jury Prize at Venice last year. Set in rural eastern Turkey, it follows the unexpected friendship between a boy and an abandoned fighting dog named Sivas.

The film’s director Kaan Müjdeci said screening it in Odessa, a city ravaged by violence throughout history, made sense.

“It’s very important in Odessa when people see my film because my film is about men’s world and an 11- year-old child learning to become a man,” he told Euronews correspondent Evgeniya Rudenko.

Also screened out of competition was “Odessa in Flames”, which won the main prize at the 1942 Venice Film Festival and has since been restored and remastered.

It shows the Battle of Odessa in 1941 from the point of view of the Romanian forces besieging the city and fighting the Soviets, to the music of Chopin and Tchaikovsky.

The issues of occupation and war propaganda have a strong echo in modern Ukraine, and organizers say they want to show opposite ideological perspectives on a same event.

“This can help us understand that any interpretation of historic events is always linked to particular ideological and propaganda clichés,” said Ivan Kozlenko, curator of the “Odessa In Flames” retrospective.

For the second year in a row, it’s hard in Odessa to ignore the ongoing conflict in Eastern Ukraine opposing government forces and pro-Russian separatists.

Only few Europeans attended the festival, and the programme featured many more documentaries than in previous years – quite simply because the budget for films has become very tight in Ukraine.

“The Ukrainian film industry is in dire straights now, as all financing has been stopped, but there’s a development strategy in place, and it’s vital to launch it as soon as possible,” said the festival’s director Viktoriya Tigipko.

“There are many talented film directors capable of shooting movies, but it’s important to make not just 10-15 films with government support, but dozens of films every year.”

One of the guests at this year’s festival was British composer Michael Nyman, who gave a concert at the Potemkin Stairs, Odessa’s giant stairway facing the Black Sea.

Nyman came with his own orchestra and provided a soundtrack to the 1929 silent film “Man With a Movie Camera” by Dziga Vertov.