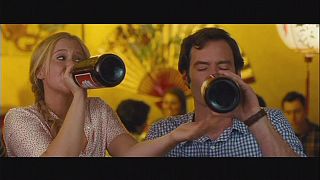 In ‘Trainwreck’, comedian Amy Schumer plays a blossoming writer on a path of love denial.

A lot of the insecurities and defense mechanisms are very much me.

Ever since she was young, Amy’s father drilled the motto that monogamy isn’t realistic into her head. Now she lives by this credo.

Says Schumer of her big-screen acting debut, “It’s about a girl in her early 30s navigating love when her defense mechanisms, which may or may not be sleeping around and drinking a lot, start to catch up to her and it’s not cute anymore.”

While her character is free from stifling, romantic commitment, in actuality, she’s kind of in a rut. The problem is, she hasn’t quite realised this.

Directed by Judd Apatow and written by Schumer herself, ‘Trainwreck’ stars an ensemble cast that includes Tilda Swinton and Colin Quinn.

While not autobiographical, Schumer owns up to sharing some traits with the character she portrays. “A lot of the insecurities and defense mechanisms are very much me,” she admits.

‘Trainwreck’ debuts in the US on July 17 and in Singapore and the UK in late August.