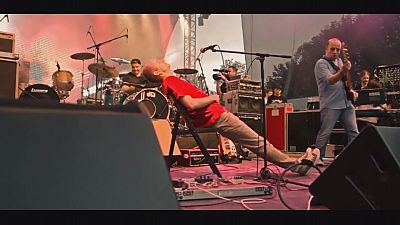 Vad Fruttik are one of the most popular rock bands in Hungary. But they are also big in London to where they headed for a series of gigs.

The boys played to a mainly Hungarian audience many of whom left their homeland to look for work in the big smoke. Now they will get a raw taste of life back home and plenty of sympathy too.

“What I might say to our fans in London is here is the situation in Hungary and you are not with us. I will tell them how much they have our sympathy to have to live and work in London. I might just say those things. It often happens if I have too much alcohol,” quipped Marcell Liko the band’s singer before leaving Budapest.

The Heaven Street Seven band have already captured the capital with four previous concerts there. The legendary band will also be in the big smoke to play to an ex-pat audience.

They are hanging up their instruments after 20 years on the road and will stage their final concert at home in Budapest in August.

Before that it will be farewell to their friends in London, keeping Vad Fruttik company.

“We thought it would be a good thing if we could also say goodbye in London to all those fans who may be interested and I hope they will be glad to come along. We were thinking were to go before we quit, where to stage a concert and we were pretty sure to hold a farewell one in London, so now we are on our way,” explained singer Krisztain Szucs.

The magic of the Magyar sound and lyrics is a frequent visitor to London and it’s not just the country’s bands but other performers too.

The number of Hungarians now living and working in the capital has grown and some people will tell you that after Budapest, London is the second largest Hungarian city where it’s possible to earn up to five times more than in Hungary.

Organizing concerts for the ex-pat community is a buoyant business.

“I was at a concert featuring a Hungarian band with a friend of mine when the idea came to us that we should organise events like this as by that time there was such a large number of Hungarians living here. We thought we would be good at it and that it would be a great opportunity for Hungarians to get together,” said Andras Ramocsa, the event organiser.

The band is of course a big draw and their fans are delighted to see them live. But for others the concert is not the most important thing. It is a chance to meet friends and other Hungarians.

“We like the bands who are performing here, of course but for me the group of people with whom I party here means more than that,” one young female fan pointed out.

Almost all of their hit songs of the last 20 years were on the Heaven Street Seven’s set. It was their final London gig which left many of their fans in tears shed by some due to homesickness as they partied to the sounds of Hungary.

“This touches the heart much more than if I was at home in Hungary. It’s probably because here I have less contact emotionally and with the language of home so it’s important the bands come here and we can listen to the music which has been a part of our lives since adolescence,” said another fan.