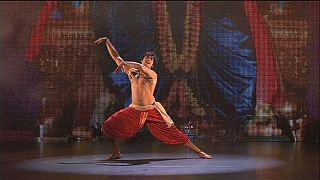 It’s a mesmerising show of dance and music. Offering a mixture of traditional and modern Indian dance, ‘Beyond Bollywood’ has opened in London’s West End.

A coming of age tale about one girl’s journey from Germany to India, it follows the usual aspirational rags-to-riches scenario.

Ana Ilmi plays the lead role: “It’s like a dream come true for us. It’s like taking a part of India and getting it to London for audiences to see what India’s about, what we are all about as dancers and what our culture’s all about.”

As the title indicates, the show wants to take the audience beyond preconceived clichés about India. Lyricist Irfan Siddiqui, a big Bollywood name, explains: “Bollywood is very big around the globe and when you think of India, you think of Bollywood. But India has so much more than Bollywood. So when we’re talking about the cultures of different states of India, every state has its own unique dance style, singing style and colors and religions and festivals. So that is something that we have tried to bring out through this musical so that’s why we titled it ‘Beyond Bollywood’.

The show has opened to mixed reviews on London’s West End. While most agree it offers an undeniably lavish spectacle, some deplore the lack of a decent story. Others say those who criticise it have failed to get its “tongue-in-cheek vibe” and slapstick humour.

‘Beyond Bollywood’ runs until the end of June at the London Palladium.