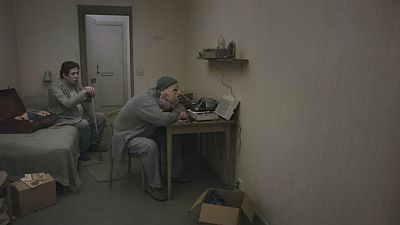 The title is a gateway into the universe of director Roy Andersson and the “the final part of a trilogy about being a human being.”

In a succession of wide shots from a fixed camera, the Swedish director rolls out his rhythm of a film every 7 years, a journey of introspection on the absurdity of life and death.

The detail is in the acting, highly theatrical, sometimes burlesque. The characters evolve scene by scene into an Otto Dix and Georg Scholz like creation. It is both funny, sinister, macabre, anachronistic and crazy.

This unique take on Scandinavian noire impressed the jury of at the Venice Film Festival which awarded the Swedish pigeon a Golden Lion.

Enjoy the movie have a good week.