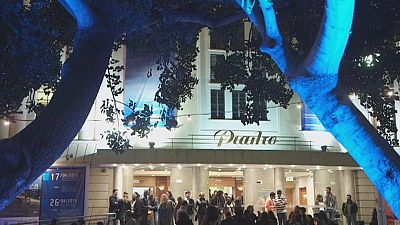 The 13th edition of “Cyprus Film Days” wrapped up on Sunday.

I think Cypriot cinema is now at its best

The festival, which takes place in the southern city of Limassol and in the capital Nicosia, aims to bring Cypriot viewers closer to independent cinema. It showcases new Cypriot productions as well as movies from around the world.

“Cruel,” directed by France’s Eric Cherrière, is the quintessential “film noir,” delving deep into the mind of a serial killer

Its anti-hero Pierre splits his time between temp jobs and caring for his Alzheimer’s-stricken father. Feeling invisible, haunted by memories of his childhood, Pierre kills at random to assuage his melancholy.

“In every film noir there is this idea that there used to be happiness, but that’s over now. In “Cruel”, childhood is this lost happiness,” Cherrière told Euronews.

“To me the film noir is an existential genre – it can really tell the story of one’s existence, all the way to its cruel ending.”

Cruel in a different way is the Israeli production “Valley” – the first full-length feature film by Sophie Artus – about three teenagers struggling with friendship, love and hate.

It’s a poignant film, portraying violence between teenagers in a way that could make many parents cringe.

“I don’t propose any answers. I am not teaching, you know, something. I don’t want to tell. But what I want to do with my film and I think it works well, it is to give the opportunity to the people to think about it (the issue of violence),”.Artus said.

The presence of Cypriot cinema at this festival gets stronger each year.

It’s “an unusual film, loosely inspired by the fate of Greek poet Kostas Karyotakis”:
http://cineuropa.org/nw.aspx?t=newsdetail&l=en&did=283797, who committed suicide in 1928.

In the film, the main character is disconnected from his identity and his past – and he kills himself again and again.

“It is not a pessimistic film. The viewers may realize, may reflect, through the story, that we are all subject to death. We are mortals,” said the film’s director Kyros Papavassiliou. “It is a poetic, existential film noir.”

Among other national films selected at Cyprus Film Days was “Conveyor Belt,” a tale about loneliness and identity.

It portrays a man living alone with his turtle and his secret passion: he collects lost luggage from the airport where he works. At home, he examines the contents of each luggage like the pieces of a puzzle, imagining what their owners are like.

“My main character is a person with no identity,” said director Alexia Roider. “He doesn’t have a specific personality. In a way I didn’t want to emotionally lead the viewers to identify with him.”

Adonis Florides, a well-known film director in Cyprus and a member of the festival’s jury, said his nation’s film industry had made great progress over the last few years.

“I think Cypriot cinema is now at its best. At this point, we have many new cinematographers. We produce many short films. We’ve also started to do more feature films. The most important thing is that Cyprus now has a very good cinema infrastructure,” he said.