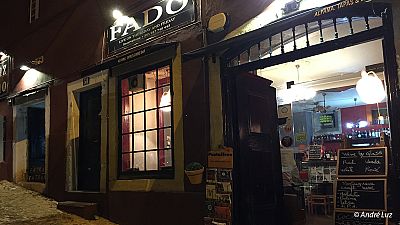 Being a post-revolution baby, I grew up with the idea that Fado music was an outdated tradition dating from a negative period of Portugese history. After all, Fado was the national anthem of the conservative dictatorship which ruled Portugal for more than 40 years, only finally being overthrown in 1974.

Political systems come and go, but Fado music never really died. The people who used to sing it in the old days just kept doing it, and over time young singers also fell in love with it, and started renewing tradition. The music is so beautiful and the lyrics so touching. I started to accept that my generation couldn’t kill Fado. I still didn’t fancy visiting a Fado house, all decorated as if the 20th century had never existed. But I reconsidered.

Young people are renewing the concept of Fado houses, reinventing traditional cuisine, mixing contemporary and traditional architecture. In spite of myself, I finally went to one, the “Arcaz Velho” cafe in Lisbon. I was totally seduced. The owners have restored an old building in the Alfama neighborhood. Inside, the decor is sober but warm. The house used to be a community bakery, and still contains a 17th century bread oven.

The menu reinvents many traditional dishes, including a delicious tomato and coriander soup from the Alentejo region, eggs with asparagus, delicious sausages, and fresh green salads, not to mention the regional wines. And the music? 30 minutes of Fado to refresh your soul and 30 of silence in which to fill your stomach. That’s a recipe which is likely to remain fashionable for some time to come.