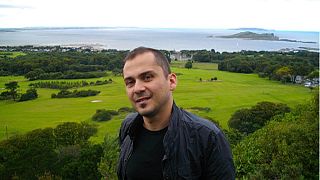 As I am now approaching my forties, one would wonder why I am writing for a blog that is dedicated to the youth of Europe.

The answer to me is simple; it was those years of my life that defined how and where I am now as a person. It was during that period that I started travelling a lot which eventually led to me moving to another European country. I was 19 when I first travelled outside the borders of my home country Greece and I did so completely on my own. I travelled from northern Germany all the way down to Austria, then back to Germany to its borders with France before returning home. It was one of the most rewarding experiences I’ve ever had.

By the time I was 26 I permanently left Greece to resettle in Ireland. Despite all the hardships and failures, living in another country away from my family’s protection taught me so much. It forged the man that I am now.

When I meet young people that still haven’t found their way into life, I always give them one piece of advice; to travel and go work or study in another country for a few years. They do not have to stay there for good like I did. But the lessons they will learn will prove invaluable to them in the future.

The thing is that when you live in a closed community dominated by your family, that have one set of ideas, one point of view or one set of values, you cannot always progress and find yourself. It is only when you study in another educational system or work in a foreign country with people of different nationalities that your brain is stimulated by new ideas.

Meeting people while you travel, or simply talking to locals in the places that you visit, could offer you the best type of education. Speaking another language, or coming into contact with a different culture could alter the way you view things, or the world.

When you compare your new experiences and discoveries with what you knew back home, you will often be surprised by how wrong you and your family were in certain things.

We live in a very privileged era, travelling is easy and cheap. We also have the benefit of living in one of the most advanced and open societies in the world, called Europe. There is simply no excuse anymore for narrow mindedness.

Because of the European Union, we have a continent of open borders, so why not have open minds as well?

The block’s institutions and various funded programs, like Erasmus or EURES, offer Europe’s youths numerous possibilities to explore the continent from tip to tip.

Despite all its faults, the EU can offer each one of its young citizens opportunities that would simply not be possible in their own communities. And it is important for the leaders of Europe to understand, that limiting the EU’s most successful policies, such as the Schengen Agreement, could only harm Europe’s future.

We should not fall into the trap of populism or xenophobia by limiting or abolishing some of the key benefits that we, as citizens, gain from the EU. Our free movement is crucial for us and for our personal development.

All the above policies are vital to form a mobile, multilingual, educated and diverse future European generation, which will benefit the continent’s economy in the long term. Because it is this kind of youth that will give an advantage to Europe, when comparing its competitiveness with other continents or regions.

The best investment that the European leaders can make, is securing future Europe with a cosmopolitan, highly skilled and educated working class. In addition, they could make an effort in reforming each country’s educational systems, modernising them and diversifying them to meet the needs of Europe’s constantly changing economy.

Instead of throwing millions into saving and securing the banks of this continent, it is evident that the wiser investment would be in Europe’s youth. They are, after all, the future.

My advice for Generation Y is to embrace Europe, together with their country’s national identity.

Be curious, travel and learn languages. Get involved in politics and show some constructive interest in your national and European political and social issues. In that way you will form an active pan-European civic society.

As result, you will become the necessary pillars of a fairer, progressive, prosperous and diverse European continent that in return will benefit you and your families.

Don’t be disheartened about where Europe is now; the crisis is the result of the mistakes made by the past generations of this continent.

If you want to leave your mark and shape yours and this continent’s future, grasp the opportunities that are available to you now. Become the change that you want to see.

It is easy to blame your forefathers for Europe’s current woes. But remember that the future generations will think the same of you too, if you fail to reform this continent.

The previous generations grew up in a war torn time, with very limited opportunities for travel, jobs and education. What will be your excuse? Think about it.