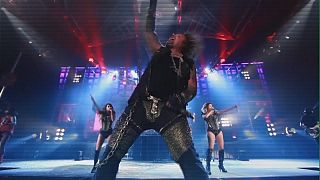 The end is near as Mötley Crüe prepare to face the final curtain. The American hard rock band have announced their final tour dates.

Announcing their tour to the media, the rockers said they want to bring to an end the band’s life with dignity

“We don’t want to be that band where you go to see Motley Crue and there is one guy left in the band and they’re playing clubs and it just ain’t cool. We want to go out on top and we want to go out on our rules,” said lead singer Vince Neil.

Paying tribute to their time together, the band’s primary songwriter Nikki Sixx added: “We want to go out together. We started this band against all odds and all the stuff that we went through together and it’s been a crazy journey. And we want to end the same way we started it.”

Motley Crue will be joined on the tour by old star rocker Alice Cooper who has never before performed with them and says the ‘r’ word (retire) doesn’t exist to him.

“I am in better shape at 67 then I was at 27. When I was 27 I was a mess but I quit drinking 30 some years ago. And now touring to me is – even through the show is extremely hard physically I feel great,” said Cooper.

Motley Crue’s Sixx was quick to quash any talk that the individual members may be moving to Florida.

“Wait, no one is retiring here. And personally, just for me, I admire my band mates and their creativity. So I look forward to seeing what everybody does. I know what we do together and I know what they do individually so I’m kind of looking forward to that. Us all having that time to do that as well and always have this that we did,” he added.

Motley Crue’s last world tour will kick off in Japan and so far, only three European dates have been confirmed.

The heavy metal quartet will bow out with a 34-date North American tour, one for every year they’ve been together, culminating where it all began in LA on New Years Eve 2015.