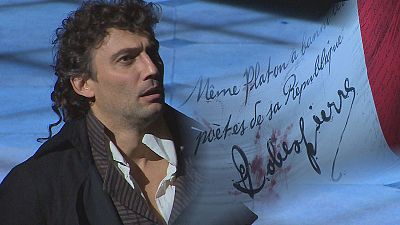 After a 30-year absence from Covent Garden, Andrea Chénier is back at London’s Royal Opera House.

This music is so supercharged with emotions, you have to be careful to not lose yourself... all these melodies are such a great invitation to sing your brains out.

The comeback of the masterpiece of Verismo by Italian Umberto Giordano has been eagerly awaited, especially by the man on the rostrum: the ever passionate Tony Pappano.

“My orchestra is very excited to be playing this music. This ebullience, excitement and theatrical cleverness on the part of the composer, and the orchestral know-how, I think it’s regal, it’s mastery… quite big… and so you need the big voices to cut over the orchestra, but the orchestra is a protagonist also, there’s a symphonic element that is undeniable… but I think that that communicates to the audience very strongly, creates a real frisson, they really feel the music is right on top of them!”, enthused the conductor.

“Like probably most Verismo operas, passion is a key factor; it means that since this music is so supercharged with emotions, you have to be careful to not lose yourself, to not do too much, to not push too hard because all these melodies are such a great invitation to sing your brains out,” said Kaufmann.
“Every line is placed so perfectly that it’s a joy, it’s a great treat to do it… but of course you have to survive,” he added.

Describing the relationship between the opera’s principle characters Kaufmann said: “A soul-mate, I think that’s what Maddalena is, it’s more than passion! It’s that innocent love that brings them together, and they’re excited about the idea that they’re going to die together, they don’t think about running away, they just think this is it, this is our destiny, we’re just meant to be together, and if we are meant to die together then we do it.”

If it feels intense watching and hearing the opera, conducting the piece is no walk in the park, according to Pappano: “There’s no question that in Andrea Chénier there are moments that are just overwhelming, sometimes it has to do with volume, sometimes it has to do with the level of passion… I think those things together are embodied very much in the final duet, and I think that this duet is just incredible, it does take your breath away, and they are climbing higher with their voices, higher and higher, and “viva la morte insieme”, when they go off to die together is very moving also.”

The performance of “Andrea Chénier” on 29 January will be relayed live into over 1500 cinemas in almost 50 countries around the world.

For more excerpts from our interviews with conductor Antonio Pappano and tenor Jonas Kaufmann, please click on the following link:

Getting to know Sir Tony and ‘the world’s greatest tenor’

Getting to know Sir Tony and "the world's greatest tenor"