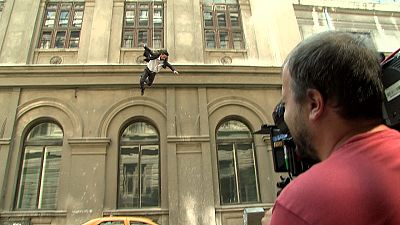 ‘Shadows’ (‘Umbre’), a new, eight-part black comedy series tells the story of a taxi driver who doubles as a debt collector for the local Romanian mafia.

I think we have production teams here which are really outstanding in terms of the professionalism, the speed of operation, the quality of the shows that we are doing

But, after accidentally killing a man, he tries desperately to get out of the business.

Filmed on location in Romania, series such as HBO’s ‘Shadows’, with almost 70 days of filming, action and stunts, are a good opportunity for local actors and production companies to showcase their skills.

We asked lead actor Serban Pavlu what it means to be in such a production.

“First of all it was a big victory. The casting itself because it was a huge casting. I was cast for one month and a half, just casting, and its a great achievement for an actor because you can practice, you can have the character for so many days,” he explained.

“And it’s for television but it’s cinema work, the number of days, the preparation, the pre-production, everything is exactly like in cinema.”

The series was filmed in summer 2014, across approximately 60 locations in Bucharest and its surroundings. Up to 950 extras, 300 costumes and 20 stunt men were used. Local, Romanian production company, Multi Media Est, made the series.

“The level of production in this country is pretty spectacular,” he told euronews.

“I mean, in my experience of working oversees, in the UK, Russia and Poland, I think we have production teams here which are really outstanding in terms of the professionalism, the speed of operation, the quality of the shows that we are doing… And the team here has worked incredibly hard to bring it to this particular level and I am very proud to working with this team.”

HBO Europe was launched in the early 90s from its headquarters in Budapest. The service now operates in 15 countries, each part with its own identity as highlighted by Antony Root, Executive Vice President of Original Programming and Production.

“The key, to us, (is) that wherever we produce, if its in Romania it has to be an authentically Romanian show, if its in Poland it has to be an authentically Polish show… So, people like me, we just bring a bit of grey hair and we have been around the block a few times so we can actually bring some experience to the making of this kind of programming.”

‘Shadows’, an edgy, gangster drama, combines great story-telling with moments of black comedy. It started to be aired in Romania in December 2014.